Happy New Year sweet friends!
I can’t believe we are halfway through Cycle 1! I am soaking up all these beautiful Florida winter days full of sunshine, boys playing outdoors all day and long times of tea and read aloud time.

Below you will find our new schedule for the up and coming quarter. I’ve tried to leave it a bit more detailed than usual. If you only want our book list, scroll further down. Please remember that we DO NOT read all the books on the list, it is simply a log of ideas to draw from once we reach that week.  I hope you all have a rest filled advent season and a sweet time of planning leading into the New Year!

Next week I plan on spending time with each child one on one to work through these Discipleship pages from Sally Clarkson’s site. There are planning pages for me in there too and the questions are so wonderful for refining vision for the coming year. Once I have a better idea of where the boys are, I can plan more specifically which read alouds we will be enjoying and what their final schedule, in terms of responsibilities, will be for the quarter. We are making a big push for more accountability this year!
In the morning our boys have a TOP 5 list of things they do before Morning Time Starts. These include: Hygiene, Making Bed, Independent Quiet Time, Exercise and a small chore (feed animals, make breakfast or unload dishwasher etc). I have my own Top 5 that I take care of: Hygiene, Brief Quiet Time, Vitamins, Drink Two Glasses of Water and Listen to a poem from The Daily Poem podcast!  I wish my Top 5 always went off without a hitch but more often than not I have to pause often to direct traffic or settle a fight or give a gentle reminder. Once we’re all done its about 8AM and we gather around the table for breakfast and Morning Time!

Morning Time (8-10AM)
We will still open with our Daily Collect:

Next we’ll move on to whatever is on our daily schedule. Whenever we have community day we do the morning time list in the evening.

It usually only takes the boys a few minutes to gobble their breakfast and the rest of the time we just sit together and go through the rest of whatever is slotted for that day. The 6 year old drifts in and out, often going to his rack of toys to play with something or he’ll cuddle with the dog under the table. The 8 year old never stays for Plutarch, thats just for the older boys. We have notebooks that we keep for a few of these topics and we get very creative with our narrations so its not stationary/just sitting for two hours. We dance, we run around, we paint, we make entries in our Book of Centuries.
T-Th we clean the table together and then go outside for our nature study time. On Fridays we have a longer Nature Hike together, so the T-Th nature walks are brief and a great way to close out our time together.

Math/Latin/Music 10-11AM
We will continue on with our use of Right Start Math. I am immensely pleased with it and with the boys’ progress. I am so thankful that I found it! The older boys use the same level and I always start with them while the younger two play for a bit. Once the older boys have had their lesson, they begin their work while I teach the third boy his lesson. Once the older boys finish the math they open their Memoria Press Latina Cristiana books. If they need a new lesson then I teach the lesson at that time. If they are doing drills and review they finish on their own. While they complete their Latin the third born leaves to practice his instrument. I will go and do a simple math lesson with the 6 year old. Once the older boys finish Latin, they go and practice their instruments. I end this time helping my youngest practice his instrument and listening to whatever the older three worked on.  My youngest typically gets 40 minutes of play (sometimes he will watch an episode of Mr Roger’s Neighborhood) during this block, the third born gets 20 minutes and the older boys work straight through since they’ve decided that math and music are the same as playing.

I begin with our smaller history books (typically from the book list I have shared below) or one of our main history spines for the year. I stop every so often to have my eight year old narrate orally. Once we finish with the passage my older boys compose a written narration of appropriate length for their individual age and skill level. I review their work and pull out any spelling words to work on and make corrections where needed. Next we spend time reviewing geography. We used to do this during morning time and only recently moved it at the boys’ request. At the end I will read a handful of smaller books or a fairy tale and while everyone loves to listen, it is primarily for my six year to give his brief narration.  My youngest plays for about 40 minutes during this time, third born gets about 20 minutes and the older boys usually get ten or fifteen minutes or even twenty depending on how quickly they got through their work. 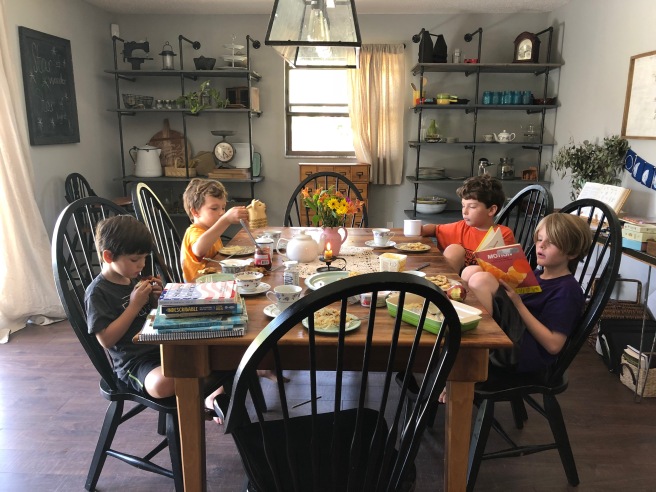 We light a candle, we eat, we read aloud. This year we are enjoying Jack’s Insects, Tanglewood Tales, the Beatrix Potter books and we listen to a poem from the Daily Poem Podcast Together.

This is a HUGE block of time and there is not a single child that works from start to finish.  My two Essentials students usually go straight to the table and go through their charts and sentence diagramming (15 minutes TOPS) and then they work on IEW (30 minutes). We spend just a few minutes on vocabulary and spelling and then they are OFF! Third born goes to the table and does his handwriting and spelling list and then reads aloud to me for 20 minutes and then he is OFF! The youngest plays for awhile after lunch or lays down and listens to an audiobook while his brother’s do their work. At about 2:15 I call him over and he does his Kindergarten work. We work on reading, a simple bible story, art, cooking, whatever is on the list! While he works the 8 year old returns for his time with Around the World with Picture Books. He looks forward to this time every single day!

Afternoon Read Aloud/Blessing Hour 3:30PM
Time for tea and books! Some days the boys beg for this to stretch longer and longer. Usually if its boiling hot outside or if its raining. But if its a fine day we read for twenty minutes only and proceed to Blessing Hour. Each boy takes their two or three duties and discharges them well so that they can run outdoors or curl up with a book and relax.  At this point the school day is done!

**The older kids do have quiet reading time for themselves. They usually get in about an hour each day either first thing in the morning when they wake up or in the afternoon or before bed.

**On days when we have music lessons in the morning, we bring as much independent work as we can for the boys to complete while they wait for whoever is in lesson. We are there for two hours so we get a good deal done during that time!

**On Fridays we have far less work to do with Essentials so after we have our spelling quiz, vocabulary quiz and Friday Exam, we usually go on a Nature Walk. We also save time in the afternoon to work on and practice our Presentations for Community Day.

** Our Winter Break is essentially our summer vacation. We do not do any work from the week of Thanksgiving until two weeks into January with the exception of a brief daily math lesson and read alouds. We also have a few kids working on Memory Master but that is on their own time.

Ready for the Quarter 3 Book List? Here we go! 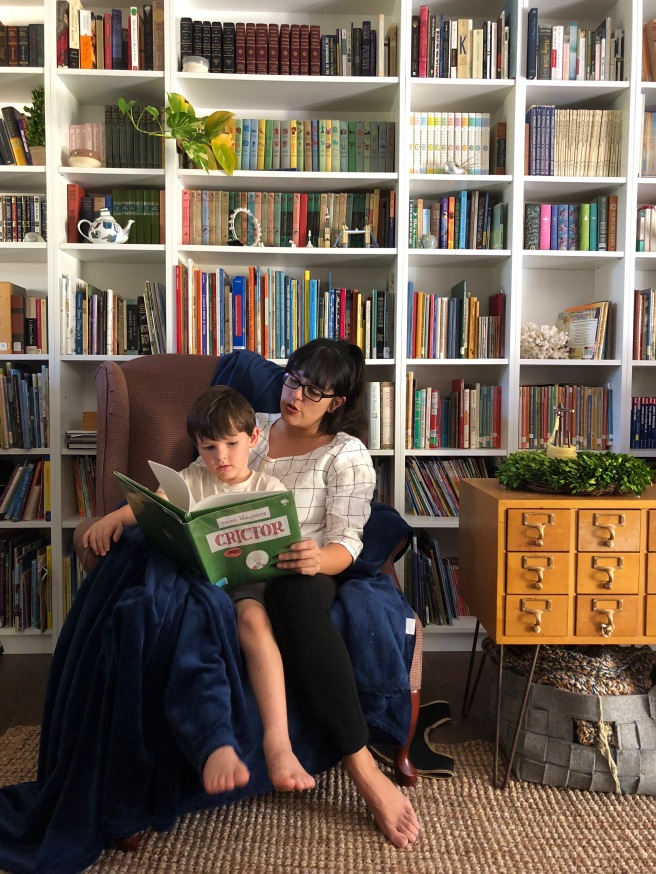 Timeline
Prince Henry the Navigator by Leonard Everrett Fischer
Around the World in 100 Years by Jean Fritz
A Book of Discovery by MB Synge
The Travels of Benjamin of Tudela by Uri Shulevitz
Henry the Navigator by Charnan Simon
The Kidnapped Prince: The Story of Olaudah Equiano by Olaudah Equiano
African Beginnings by James Haskins
Ink on His Fingers by Louise A Vernon
The World of Columbus and Sons by Genevieve Foster
The Royal Diaries: Isabel: Jewel of Castilla by Carolyn Meyer
Blood Secret by Kathryn Lansky

Geography
Henry the Navigator by Charnan Simon
The Kidnapped Prince: The Story of Olaudah Equiano by Olaudah Equiano
African Beginnings by James Haskins

Math
Pastry School in Paris: An Adventure in Capacity by Cindy Neuschwender

Art
Giotto
Unfortunately, these are ALL tricky to find. Check your local library!
Giotto by Mike Venezia
Giotto Tended the Sheep by Sybil Deucher
A Boy Named Giotto by Paolo Guarnieri
The Glorious Impossible by Madeleine L’Engle

Geography
From Ashanti to Zulu: African Traditions by Margaret Musgrove
Finding out about Deserts by Angela Wilkes

Science
Rocks, Minerals and Gems by Scholastic
If you Find a Rock by Peggy Christian
Rocks: Hard, Soft, Smooth and Rough by Natalie Rosinsky
Let’s Go Rock Collecting by Roma Gans
Rock Factory by Jacqui Bailey
Rocks in His Head by Carol Hurst