One day last spring I had a weekday off from work, so I took the kids for the morning and told Elsie she could sleep in. As the boys and I finished breakfast, I looked out the window, looked back at them, and instantly knew how we should spend our morning.

So I helped them clean their breakfast off their shirts and said “Everybody get your Crocs on!” which in our household induces a Pavlovian response of racing first to the mudroom for footwear, then out the door with joyful shrieks and as many elbow-jabs to the nearest brother as possible. I was the last one outside and as the door shut behind me I saw the dog and the kids tearing around the corner to our orchard in the front yard, felt the warming rays of a glorious sunrise, and knew that I’d get to spend all morning outside on our property with the boys. I couldn’t help but think, Dude, our life is so idyllic. Little did I know that within a few minutes the two-year old would quickly be snapping me back to reality.

You see, after moving in, the first thing we did on the property outside of the house was plant the orchard. All hands were on deck, it was a glorious day of digging and sweat, preparation and anticipation.

I puffed out my chest with philosophical sentimentality- I would be able to watch my kids and these trees grow together, see them both change over time and produce all kinds of symbolic and literal fruit. Some of the trees I had started from seed myself, others were given to me by family members, and some we got from local nurseries. Of the 20 or so trees we have, only two or three were ready to fruit in the first year- the rest were still several years away from producing anything, which is exactly why I wanted to get them in the ground as soon as possible.

On that particular morning the trees had only been planted for about 10 months. To my great surprise one of the small plum cultivars had spent the previous weeks flowering and was actually fruiting. The neighborhood birds had picked off most of the young buds early on, but I excitedly showed the boys the three remaining, still-ripening, cherry-sized fruit hanging about a foot off the ground. At this point in their lives their reaction to my excitement about trees varies. But my hope is that they’ll one day gain an understanding and fascination with planting and trees, that these experiences of their childhood will sink in and grow roots to bear fruit later in their lives.

I walked off to check on some of the other trees, and then I suddenly had one of those sixth-sense parenting moments- too much silence in the background, a gut instinct that something was wrong, and the acknowledgement  “I just turned my back on all four kids at the same time. What was I thinking?” I turned around and immediately scanned for my youngest son, who I found still standing next to the plum tree, and…

“Don’t touch my trees!!” I screamed it so loud my voice actually cracked on “trees”. I ran across the orchard as fast as I could… But it was too late. My baby had already ripped the last three plums off the tree, and with it had destroyed the remnants of my first idyllic harvest in the farmhouse.
The two-year old, of course, was having a blast. He held up his hand. “Wook Dah-Dee!! You see dat??” As he jumped up and down with excitement, little slices of his chubby belly peeked out under his t-shirt, his diaper sagged out the back of his shorts. As I took in the dirt, snot, and sweat smudged across his face, his huge smile and bright eyes helped dissipate my frustration. As a token acknowledgement, I muttered “Yeah, great job buddy” under my breath, then put the three fruits in my pocket and aimlessly sulked off, deflated and defeated. 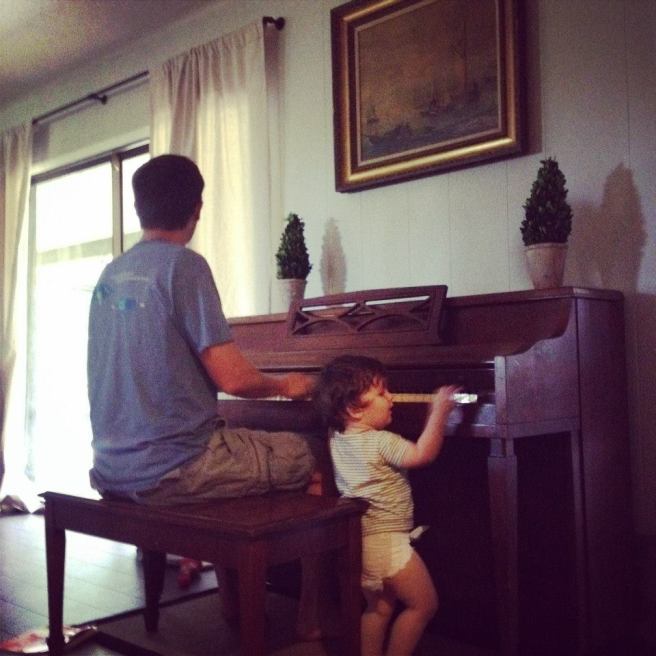 As a Christian father, Deuteronomy 6 and 11 are always rolling around in the back of my head. As a homeschooling father, I get more opportunities with my children to actually try and make it happen. So I spent the rest of the morning thinking it through and by lunchtime had a plan. We sat down to eat and I read them John 15:1-8. To be honest, these little home Devos are totally hit-and-miss, I never know what direction they’ll go or if they’ll be even moderately successful. So I threw out a couple softballs to help get the discussion started:
“Alright boys, who do you think the Gardener is?”

“It says we are like branches- what happens if we stay connected to the vine?”

They thought for a second. “We stay alive and bear fruit.”

“What happens if we get disconnected from the vine?”

“And can we produce fruit if we’re not connected to the vine?”

By this point the mood had sombered a bit. For full effect I pulled the three fruits out of my pocket and held them up.

“See these fruits? Now that they have been pulled off the tree, will they keep growing?”

They shook their heads. “No.”

“By themselves, do they have the ability to stay alive and grow, or do they need to stay connected to the vine?”

“They need to stay connected to the vine.”

“You see, this is what it means to abide. We are not literally branches, but symbolically we need to stay connected to Jesus, who is the vine. We can’t do it by ourselves- once we are disconnected, we die. We need to live in him, dwell in him, abide in him.”

A brief moment of silence followed, but I could tell the analogy had sunk in. They got it.

And I got it too.  Even now, when I think back to that morning, there are two main lessons I learned.  The first, of course, is to abide in Christ.  The second, is that even the most frustrating and disappointing moments can be turned into meaningful character-shaping moments, for me as much as for the boys.

One thought on “Abide”