As a dad, I want my home to be full of LIFE– learning and discovery, excitement and joy, good music and delicious food. 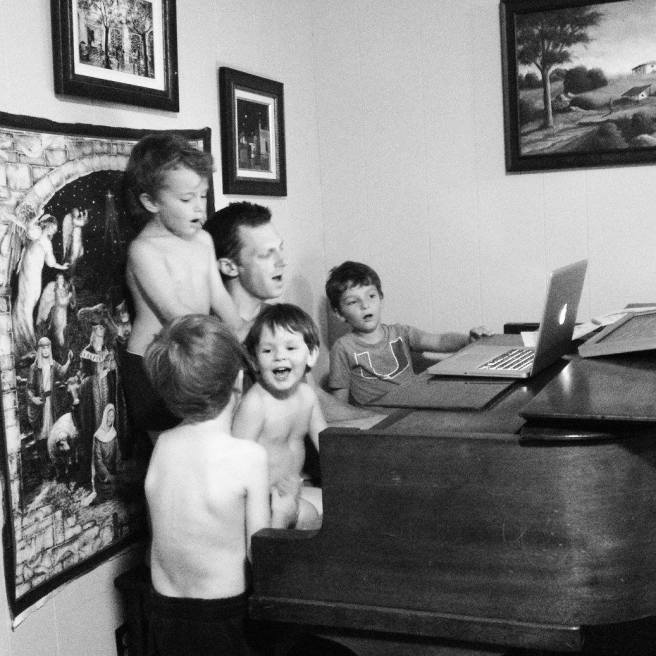 One way that we infuse our home with life is by keeping a variety of animals.  We are starting small and slow on our little hobby farm (For some larger-scale farm beauty check out our friends at Marmilu Farms), but we did develop a master plan for the property that incrementally includes chickens, turkeys, guinea fowl, ducks, rabbits, bees, quail, pigs, goats, sheep, cows, horses, llamas, alpacas, ostriches, capybaras, lesser kudu, and velociraptors.  OK, well maybe not quite that much, but we’re learning as we go, and this is the story of how we stumbled wing-deep into turkeys.

Two months after moving on to this property, we picked up a handful of chickens.  Soon after, Elsie went to our local farm store for chicken feed and came back with chicken feed and two turkey poults. (Which, incidentally, helped create a new family rule: NO IMPULSE BUYS OF LIVESTOCK.)  Only one survived, but I built a small coop for it and after seven months we had a fantastic backyard-raised turkey dinner.  Our first foray with turkeys was a success! 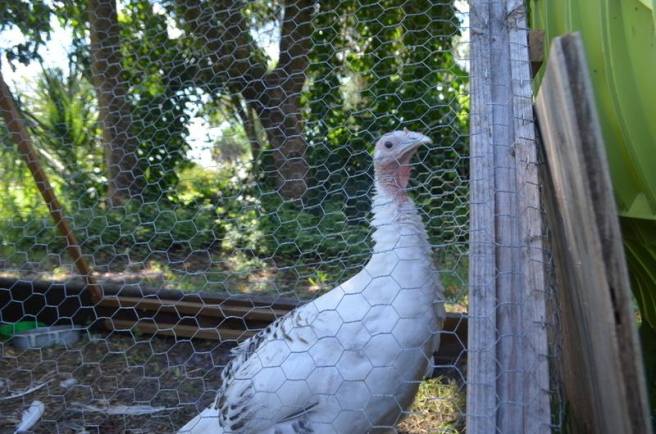 So when year two rolled around we upped the ante and brought home 3 poults from the farm store.  I expanded the first coop for them, they had plenty of fresh air, sunshine, and room to roam, and everything was fine and dandy.  Then one day when they were about four months old I heard a huge commotion coming from the coop, and as I walked over to investigate, what I saw was basically an avian version of a vintage WWF fight.  Two of the birds were duking it out, kicking, scratching, pecking, beating each other with their wings.  It took me a second, but then I realized “Ooooooh… I have two males and one female, and the males are fighting with each other because of her.” So the next day I sold a male to a coworker and revised our turkey strategy: initially we planned to fatten them up and eat them, but now that I knew I had one of each sex, I was just going to let them go and see what happened.  Sure enough, two months later they started mating, and one month after that she started laying eggs.  At some point in the process they picked up the names Tommy and Shelley, the former because male turkeys are called toms, the latter because her production of nearly one egg per day over the course of six months was simply amazing, not unworthy of a namesake like Mrs. Duggar.

Turkeys really are amazing animals, and the boys and I were endlessly fascinated with them.

The assortment of feathers, the way they walk and eat, the way that Tommy would puff himself up and snort, and his inclination to dance.  We found ourselves regularly walking out to the coop to check on them for sheer entertainment, often several times a day, and they became an instant point of discussion with friends and family that visited.  We had many a deep conversation standing around that coop watching them.  And they continued their daily cycle of mating and laying.  My 6-year old once witnessed the act and later told us “I saw the turkeys play this kind of wrestling game.  Shelley sat on the ground and Tommy crawled up on her back and was waving his feathers and doing a weird dance on her back.  He looked like he was having a lot of fun, but she didn’t seem to like it very much.”

With such a prolific production of fertilized eggs I excitedly bought an incubator with the dream of having a mini turkey farm, keeping some of the poults for ourselves (for more delicious backyard-to-table dinners down the road) and selling the rest for some extra cash on the side.  Little did I know how much the odds are stacked against the production of good, healthy poults!  If the egg is fertilized in the first place, the embryo has to grow successfully.  And even if an embryo develops properly, carefully maintaining the incubator at a certain temperature and humidity, it has to hatch itself.  Sadly, I had several poults die while hatching, as they were not strong enough to sufficiently crack through the shell and push themselves out.  And of those that did manage to hatch, some had defects or were ill and others wouldn’t eat or drink, and they ended up dying within the first few days.  The harsh reality of life and death shattered my turkey breeding idealism- I’d guess that for every dozen eggs I put in the incubator, only 2-3 would make it through to be healthy birds.  But boy did I try!  I borrowed a friend’s incubator and had them running in tandem for nearly five months, so that as one batch of eggs was hatching, the eggs in the other incubator would be halfway through, and so on.

The boys enjoyed the whole process as much as I did and were exposed to important life lessons in the meantime.  They liked watching me give the birds their food and water, and would accompany me on the daily trek to retrieve the egg.  Once the incubators were running, I would catch them sneaking into the room to check on the eggs through the incubator window, even if they were still weeks away from hatching.  And as the hatch day approached, I taught them how to candle the eggs with a flashlight to check on the development.  And if you ever want your normally rambunctious kids to sit still and channel their energy into excited shrieks and yells, let them watch something hatch out of an egg!  Some poults started and finished the whole process in about two hours, others took nearly two days, and others died halfway through.  And, of course, watching a new hatchling is fascinating, so they all took shifts on Turkey Patrol.

They loved helping me feed and water the poults and watching them grow and change over the first few days and weeks, and experienced the sadness when I told them a sick newborn had died.  One day they came home and asked where the newly-hatched turkeys were, and I explained that I had sold them and that we would use that money to help take care of the other animals.  The boys gathered a whole range of valuable experiences with these turkeys, hands-on experiences that balanced nicely with their classroom studies. 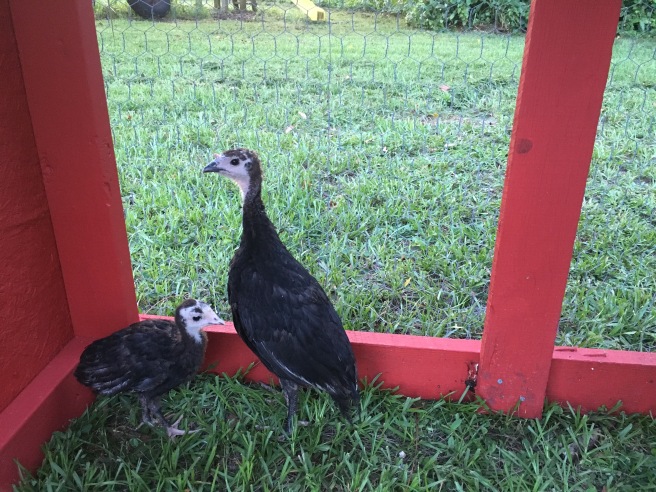 And what about Tom and Shelley now, you ask?  They were delicious!! 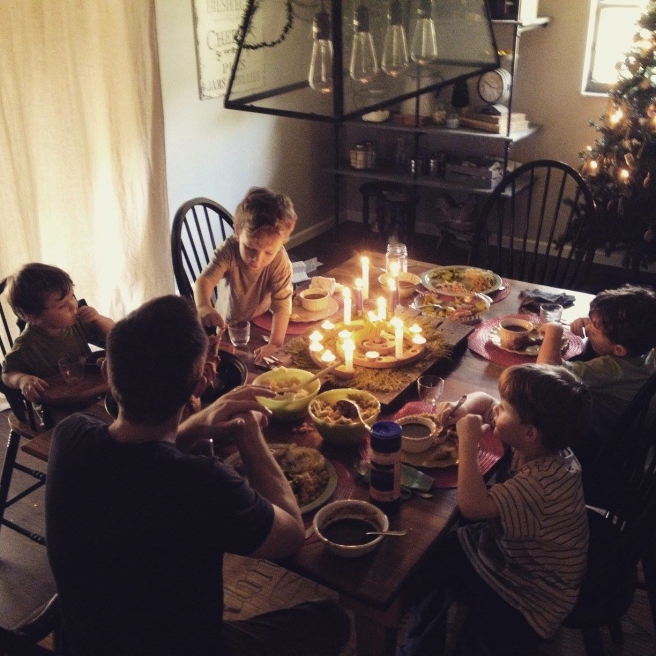 But they gave us one last parting educational gift- Can you guess what those two things are in the picture below?  Incredibly… those are still-forming eggs!  When we butchered Shelley, we found those inside. It takes more than a day for a turkey hen to form an egg internally, so there is a pipeline of several forming eggs inside her at any one point.  AMAZING!

One thought on “For The Birds.”