Last Spring I sat at my desk and pulled out my new planner. I wrote out all the things we would be doing in the fall and felt tired just writing it all down.

A few weeks later I trotted off to the FPEA convention and had a rather eloquent kick in the butt from Sonya Schafer of Simply Charlotte Mason. I went home and stripped my schedule down to the bare bones—and it was still overwhelming.

So I made the decision to start Adventures months earlier than I had initially planned. Early enough to get in at least 10 weeks of school before Classical Conversations, A Year of Skillful Playing, therapy and sports all took off in late August/early September. 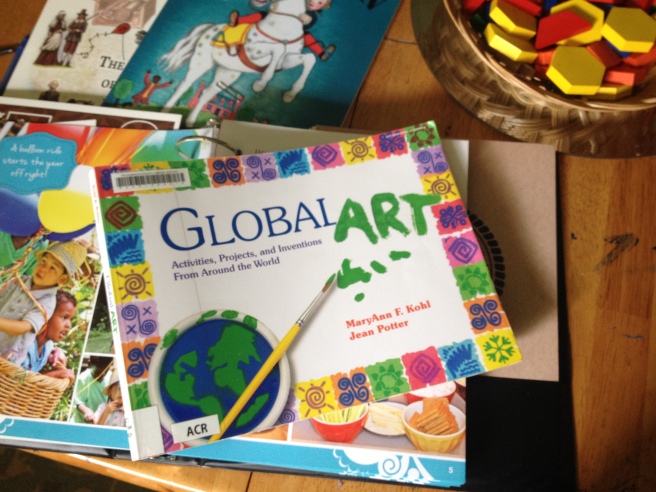 I am so grateful for that decision!

We spread our unit on George Washington out over two weeks. In that course of time, Classical Conversations began and our in home therapy sessions started for our youngest boy. Next week, our year with Homegrown Preschooler starts. (Check back for updates!) Its somehow easier to add extras into an already established routine. The boys were eager to add new things in while still adhering to our established rhythm with Adventures. Real life seems a bit more manageable this year! I may have to repeat this schedule for Exploring Countries & Cultures. I always have to remind myself to take advantage of the freedom that comes with homeschooling.

Here is the breakdown on Adventures Week 9: GEORGE WASHINGTON!

(disclaimer) My eldest son is OBSESSED with GW. For his 7th birthday, our entire family dressed up like different Revolutionary war heroes and we spent the morning reenacting different battle scenes. He wanted a GW tshirt and a documentary for his birthday.  I knew we needed to spend a few weeks on ol’ George so the booklist is hefty! 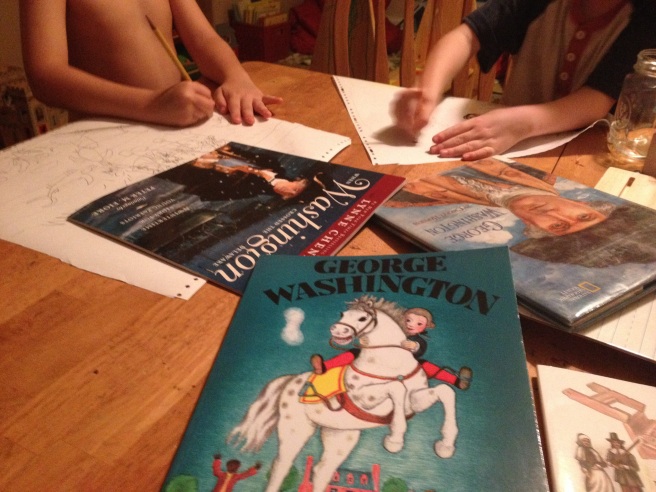 Activities:
1) Land Survey
Mother Earth News provides a very detailed explanation on how to survey your own land. I was not really up for going all out on this one. I just wanted to give the kids a basic idea of what a teenaged George Washington did to earn his bread and butter.  Our homestead is 2.5 acres, flat as a pancake. We made the chaining pins and used a piece of yarn to get our level measurements. It was 92 degrees and we received approx 18 mosquito bites between 5 people in the span of twenty minutes.  The boys were thrilled!

2. Indian Hoecakes
Based off one of our booklist treasures, “George Washington’s Breakfast” by Jean Fritz. The boys begged me to cook these little cakes outside in the fire pit on an actual hoe. I was pretty close to complying until I imagined my exhausted husband shaking his weary head and asking, “Sooo how exactly did the fire that ravaged our entire home start?” We stuck to our stove and a regular ol’ frying pan.

3. Fort Necessity
I am so sad I didn’t snap a picture of this activity. The boys built an enormous blanket and pillow fort and had a blast all day inside. We brought in a lantern and knocked 6 books off our list in one afternoon. There was a massive thunderstorm outside which made the fort an extra cozy haven for us.

4. Unsanctioned crossing of the Delaware
I managed to get my two youngest children down for a nap last week. After a night of little rest, I asked the older kids to build legos while I took a quick nap. Whenever my eldest children are left to their own devices, unexpected things happen. Thankfully, the firstborn develops ulcers at the mere whisper of anything unsafe, so I can rest easy. It may be unexpected, but it won’t be dangerous. I woke up 30 minutes later to find the boys floating toy boats filled with soldiers in a bathtub filled with water and ice. I never ever would have thought to do such an activity. They adored it.